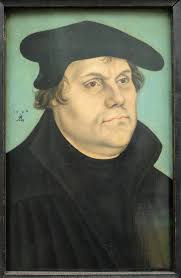 we approach the five hundred year anniversary of the Protestant reformulation on October 31, 2017, it is good for us to look back and examine how that all worked out for them. For, how are we to judge the fruit of tree over the last 500 years unless we first examine the roots of that tree? Therefore, let us start from the beginning and blink our eyes at the 38 Most Ridiculous things that Martin Luther, the illustrious Father of Protestantism and the Bible-Only (sola-scriptura) movement, said. It is still hard to believe how we allowed and still allow this very plain instrument of Satan to divide God’s people . . .

MARTIN LUTHER ON THE DIGNITY AND MAJESTY OF GOD

In regards to one of the sources of this compilation, (Luther, Exposing the Myth), Reformed protester and Martin Luther Apologist James Swan of William Paterson University, has written a detailed critique of. In crafting this compilation I considered Swan’s response, and I ended up not including many of the quotes that he had a good case against. In some cases Swan was spot on, but in other cases he would have been much better off not trying to contextualize or excuse Luther. In those cases, Swan’s intellectually honesty is betrayed by his passion for Luther.